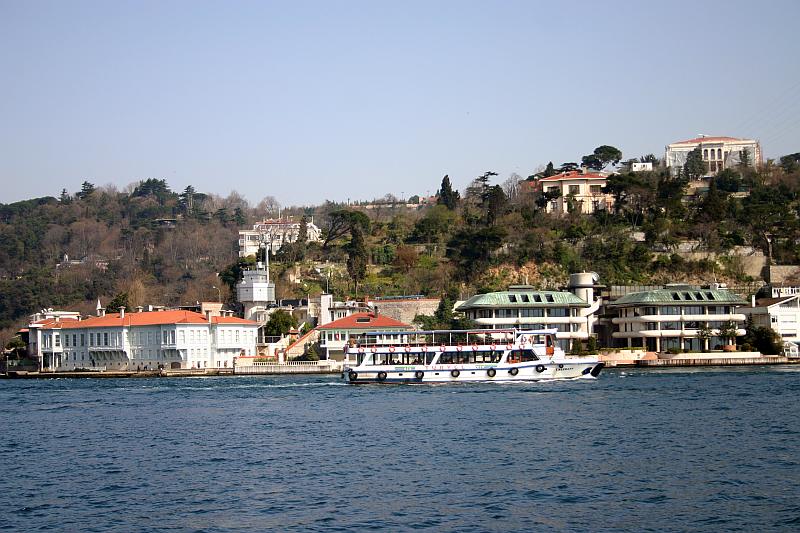 Bosporus, traditionally called “Bogazici” or “Istanbul Bogazi” is one of the most beautiful sites in the world. At night time, the pearl of Istanbul lightens the night. The natural border Bosporus which is between Asia and Europe resembles a wide river with old seaside mosques, palaces, fishing villages, wooden water front houses (yali), mansions, gardens, beaches and restaurants. If you live in a waterside residence (yali) that is an indispensable ornament of Bosporus, be sure that it means you are one of the privileged people in the world. It is 32 km (20miles) long strait which joins the Black Sea with the Sea of Marmara. The first suspension bridge (Bosporus Bridge) across the Bosporus was built in 1973 which is 1,074 m (3,524 ft) long and the second one (Fatih Bridge) which is 1,090 m (3,576 ft) long, in 1988. The third one also is planned in these days. There is 5km (3miles) distance between first and second bridges. Bridges are the most significant part of intercontinental travelling in the only city having a sea passing through.

The depth of Bosporus is from 50 to 120 meters (164 to 394 feet), averaging about 60 meters (197 feet) deep and t he width of the it is from 500 meters (1640 feet) to 3 km (2 miles). According to the theory Bosphorus was formed about 5600 BC when the rising waters of the Mediterranean and Sea of Marmara breached through to the Black Sea, which at the time was a low-lying body of fresh water. Bosphorus was totaly blocked by earth and rock intime an earthquake destroyed the this blockage, releasing a deluge of water from the Bosphorus into the Black Sea, raising the water level and flooding its coastal communities.

Over the centuries the Bosporus has been crossed by intrepid merchants, conquering armies and many an adventurous spirit. Today it is still popular with thousands of Istanbullus who commute daily along its length, fishing vessels which try their luck in its waters and tourists who ride its ferries from Eminonu to Anadolu Kavagi and back. You have a chance to go to Asia from Europe and back with enjoying the view of highlights on the shore in a short time. Both shores of Bosporus are densely populated and have attractions galore for the day visitors. Two beautiful fortresses, constructed halfway up the Bosporus by Mehmed the Conqueror on opposite shores, stand facing each other. You can take the boat trip which stops at Besiktas, Istinye and Sariyer on the European shore. There are also landing stages at Bebek and Ortakoy and Yenikoy which operate morning and evening commuter services while from Bebek some boats cross during the day to the Asian side. Alternatively, along the European shore buses and minibuses run regularly.