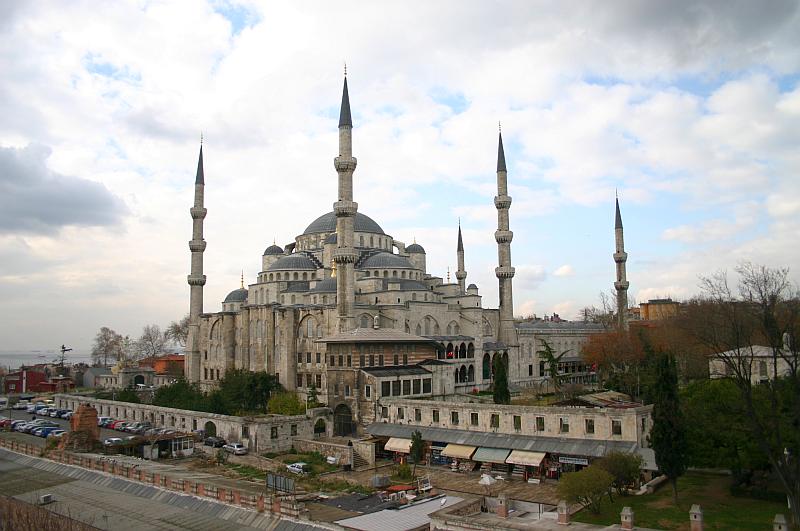 Suleymaniye Mosque is a gate, opening to ages, which will stand so long asthe world stays and which welcomes everyone with all its magnificence and affection. It was designed by great Ottoman architect Sinan and was commissioned by the richest and most powerful Sultan of the Ottoman Empire, Sultan the Magnificent (Suleyman I), and built on the second hill of Istanbul between 1550 and 1557 AD. It is the forth imperial mosque and crowns one of the seven hills in Istanbul and 3523 craftspeople worked on its construction. Suleymaniye Mosque is not the largest of Ottoman Mosques but it is certainly the grandest which was designed as a complex with adjacent structures to service both religious and cultural needs. Architect Sinan’s tomb is just outside the mosque’s walled garden, beside of the medrese building. It has 4 beautiful minarets which represent the fact that it was built by the Sultan, because princes and princesses could construct just two minarets; others only one. Suleyman I was the 10th Ottoman Sultan so 4 minarets have a total of 10 galleries.

The size and simplicity of inside which is very light is breathtaking. You will definitely be impressed with the main dome which is 53 meters high. It has 4 massive columns (one from Alexandria, one from Lebanon, two others from Byzantine palaces in Istanbul), gorgeous stained glass windows and little interior decoration with very fine iznik tiles.

It has beautiful garden and three sided forecourt surrounded by a wall with grilled windows. In garden there is a domed ablution fountain. Near the southeast wall of the Suleymaniye Mosque is the cemetery with the tombs of Suleyman and also his wife Haseki Hurrem Sultan with beautiful tile works.

Suleymaniye Mosque was damaged couple of times because of fires but restored again and today it is one of the best-known sights of Istanbul which fascinates every visitor with the aesthetic supremacy of its interior and exterior. The numerous earthquakes that shook the city since 16th century did not cause even a single crack.